12 photos
“Zanzibar” . . . the name just sounds exotic. Lying only a half-hour plane ride from Dar es Salaam, it is famous as the “Spice Islands,” from early trading days, it was the last outpost of Arab trading in black slaves, and it teems with approachable endemic Zanzibar Red Colobus Monkeys.

Spice Islands. The name “Spice Islands” has, in the past, been used to describe Zanzibar and, more often, the Maluku Islands (the “Moluccas”), which lie off the west coast of the island of New Guinea, in what has become known as Raja Ampat, in Indonesia. (The coral reefs of the Raja Ampat area are biologically the most diverse in the world. See elsewhere on this website, for underwater images of those amazing coral reef ecosystems.)


Slave trade. For an extended period of time, Arab slave traders from Zanzibar would take raiding parties to Tanganyika and go far inland, buying slaves from the local tribes or simply capturing them. Through much of the 19th century, the law forbade the selling of slaves to Christian powers, and the United States and Great Britain established diplomatic relations to try to persuade the traders to stop their slave businesses. They had little success. In 1873, under threat of naval bombardment by the British, the Sultan of Zanzibar closed the slave markets; but, even then, slave trading continued, particularly on the Tanganyika mainland and often quite openly. The slave trading finally ended when Britain took over the mainland, following the defeat of the Germans in World War One.

Independence and merger with the mainland. Zanzibar gained its independence from Britain in 1963 and became a constitutional monarchy. Four months later, in early 1964, the islands merged with mainland Tanganyika and became the Republic of Tanzania.


Red Colobus Monkeys. The Zanzibar Red Colobus Monkey is a spectacular little monkey, with a shock of bright red fur on the back and somewhat unkempt, even humorous hair around its head. It is endemic to Unguja, which is the main island in the Zanzibar Archipelago, and it is classified as “endangered,” under the standards of the International Union for Conservation of Nature (“IUCN”), which means that it is at “very high risk of extinction in the near future.” Fortunately, in recent years, the government has taken note of the threats to these wonderful creatures and is now actively working to secure its protection.

Chole Island, off the coast of Mafia Island 1518

Chole Island, off the coast of Mafia Island 1543 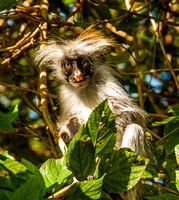 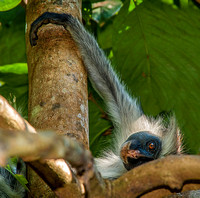