48 photos, 1 videos
Bears, bears, bears. There are eight species of bears in the world: Brown, Polar, Black, Panda, Sloth, Spectacled, Asiatic Black, and Sun. The bears found in Alaska, Brown Bears in coastal regions, Grizzly Bears in inland areas, and Kodiak Bears on Kodiak Island, are actually all "Brown Bears" and are the same species, “Ursus Arctos,” but only the coastal bears are referred to as Browns, while those in the lower 48 states, inland, and the Arctic are referred to as Grizzlies. Brown and the Grizzly are the same subspecies, “Ursus arctos horribilis,” while the Kodiak is a distinct subspecies, “Ursus arctos middendorffi.” Browns and Grizzlies vary dramatically in size, with the large male Grizzlies weighing up to 800 pounds and the coastal Brown Bears up to almost twice as much. Kodiaks can grow to even larger. This is believed largely to result from the plentiful and high-calorie diet of the coastal bears.

For fans of the University of California. The mascot of the University of California, Berkeley, the “California Golden Bear” (“Ursus arctos californicus”) is a subspecies of the Grizzly. The last one was shot near San Diego in 1922, and they are now extinct. The mascot of the UCLA, the "Bruin,” is simply a Brown Bear. The word itself is an old English name for brown bears, which was taken from the Dutch word “bruin,” literally meaning “brown.”

Polar Bears. Though the Polar Bear is a sister species of the Brown Bear (“Ursus Arctos”), it is a distinct taxonomic species (“Ursus maritimus”) and has quite different characteristics. The Polar Bear is the largest carnivore in the world and the only member of the bear family that is entirely carnivorous. Along with the similar-sized omnivorous Kodiak Bear, it is the world’s largest bear. Surprisingly, Polar Bears are considered to be “marine mammals” (as are whales, seals, dolphins, etc.) and have been known to swim for days and up to 300 kilometers. For a discussion of their diet and their risk of survival, as global climate change melts the arctic icecap, see the text in the Svalbard Gallery.

Inupiat village of Kaktovik. In the Arctic Ocean, just off the northern coast of Alaska and 75 miles west of Canada, lies tiny Barter Island. Kaktovik is the only village on the island and has a population of 2-300. Each year, the Inupiat Indian residents are permitted, by treaty, to harvest 3 Bowhead Whales, for subsistence. Bowheads are the second largest whale, by weight, after Blue Whales. Though it was hunted vigorously in years past, and the species is considered “threatened” in most parts of the world, commercial whaling is no longer legal, and the species is slowly recovering. Some native peoples are allowed to hunt Bowheads on a subsistence level, and we were told that the villagers do eat all the meat and that their hunting does not significantly affect the recovery of the species. After they have stripped the bones, they haul the skeletons to a sand spit outside the village, in an effort to minimize the number of Polar Bears that wander through the village, looking for food/trouble. Even still, the “bear patrols” which guard the village encountered about a dozen bears each night we were there. The “bone pile” depicted in many gallery images provides a natural destination for photographers, and we saw as many as 20 bears at times.

Arctic National Wildlife Refuge. This extraordinary wilderness area, bounded on the north by the Arctic Ocean and on the east by Canada, is the largest and most northerly National Wildlife Refuge in the country. Among the numerous amazing facts about ANWR, it:
-- Supports the greatest variety of plant and animal life in any conservation area in the circumpolar north -- Is home to over 200 species of birds, 37 species of land mammals, 25 species of fish, and 8 marine mammals along its coast -- Includes coast, tundra, mountains, and boreal forest (meaning “northern forest” and also called “tiaga”) -- Is one of the world’s largest “carbon sinks,” storing vast amounts of carbon that would otherwise stay in the air in its tundra and forests -- Includes the four highest peaks and most of the glaciers in the Brooks Range -- Features 18 major rivers, three of which (Sheenjek, Ivishak, and Wind) are officially recognized as Wild and Scenic.

Denali National Park and Preserve. This is one of the largest National Parks in the country and is larger than the State of Massachusetts. Denali is the Athabaskan name for Mount McKinley and means “the high one.” Though McKinley is the present official federal name, most Alaskans and the State of Alaska call the mountain Denali, and, as of 2013, a bill is pending in Congress to change the official name of the mountain back to Denali. The height of the mountain has recently been revised, so that most experts believe Denali rises 20,237 feet above sea level. Measured by topographic prominence, Denali is surpassed only by Mount Everest and Aconcagua, and the only higher mountains in the world are in the Himalayas and the Andes. Denali rises about 18,000 feet from its surrounding base at 2,000 feet, and this exceeds the vertical rise of Mount Everest, which rises only 12,000 feet from its surrounding base at 17,000.

Aurora Borealis (“Northern Lights”). The Aurora Borealis in the north and Aurora Australis in the south polar regions provide wonderful light shows, pulsating as they come and go. For an interesting video of the phenomenon, click this link. They occur most prominently in the months surrounding the March and September equinoxes. They are most often seen as a green color, but can also be red, blue, or purple, depending upon on the altitude at which the lights are generated. Our Sun continuously emits plasma, a matter comprised of positively and negatively-charged protons, electrons, and ions. This “Solar Wind” streams away from the Sun, in all directions, at speeds that vary greatly but are generally something like 1.3 million miles per hour. This “wind” enters the Earth’s atmosphere, and the particles are pulled toward the Earth’s poles, depending upon their polarity. When they collide with the oxygen and nitrogen atoms that comprise the air we breath, the collisions create the northern and southern lights. Since the solar wind travels far slower than the speed of light, it (and the resulting Aurora) will take 2-4 days to reach the Earth, depending on the type of the wind, while light rays emitted by the solar wind will reach Earth in a mere 8 minutes. Because of this, astronomers are able to observe the light emitted by the solar winds and predict in advance the likelihood of the Aurora Borealis for a given night. 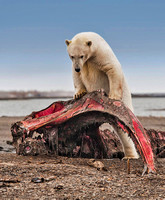 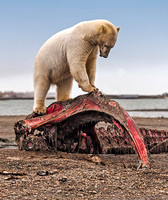