73 photos
Venezuela is a country of contrasts. On the one hand, it faces daunting, perhaps insurmountable economic problems, it is run by what appears to be a corrupt socialist government, and it is wracked with serious criminal violence, particularly in Caracas. On the other hand, while a virtual mystery to many outsiders, particularly Americans, it is a wondrous land of unusual and breathtaking, other-worldly beauty.

Hyperinflation. Venezuela has the highest inflation rate in the world, and its currency, the Bolivar Fuerte, is in utter freefall. This is a complicated situation, and a discussion of its causes is far beyond the scope of this photo website; but a few interesting facts provide a sense of the urgency. While the legal rate of exchange is 6.3 BF to the US dollar, Venezuela has the most dramatic currency black market in the world . . . maybe of all time. Early in 2014, the world rate (“black market rate”) rate was 86 BF to the dollar, an extraordinary 14 times the government-decreed legal rate! When we arrived in Venezuela, in early November 2014, the free exchange rate had grown 100 to the dollar. When we left the country 25 days later, the rate had gone to 125 to the dollar, and by the end of 2014, the rate had gone to 175 per dollar! If you visit Venezuela, be very careful that you do not use the official exchange rate – no one uses the official exchange rate, unless they are utterly clueless. If you and your wife have a pizza and a glass of wine, what would cost you $18 in cash, at the exchange rate available on the black market (using 100 to the dollar, as a rough estimate of what you can realistically get), would cost you $285, if you put it on your VISA card! While the crash in the Bolivar Fuerte does not directly measure the rate of inflation in the country, it is reflective of the extraordinary inflation that was and is still taking place, seemingly at an accelerating rate. UPDATED NEWS: As of August 12, 2016, the value had fallen to an astonishing 1012 to the dollar! God knows what this might mean for Venezuela.

Oil rich. On the good side, the country is blessed with the largest oil reserves of any country in the world, including Saudi Arabia. It is the third largest supplier of crude to the United States, after Canada and Saudi Arabia. Interestingly, the retail price of gasoline within Venezuela is outright bizarre. When we were there, it sold for 0.07 Bolivares Fuertes per liter – which, at the current world market value of 175 to the US dollar, would be 0.04¢ (not 4¢) per liter, or 0.15¢ per gallon! Can you wrap your mind around that math? You fill your tank for 1.5¢ and tell the attendant to “keep the change.” In any event, at about 1/7th of a cent per gallon, gas is essentially free!

Stunning rock ramparts of the Venezuelan “Tepuis.” The initial cause of our interest in the country was the wonderful “table-mountains,” called Tepuis (or Tepuys), which means “house of the gods” in the language of the indigenous Pemon people who inhabit the Gran Sabana (“great savanna” or “great grasslands”) of the surrounding area. These unusual mountains are found in an area known as the Guiana Highlands, which occupies more than half of the entire country. They rise vertically, perhaps 6000 feet, from their surroundings, are essentially flat on top, and can be several miles across. These astonishing geological structures are made of sandstone, typically Precambrian quartz arenite sandstone. What this means, in brief, is that they are made of quartz-laden sandstone that has, over the millennia, metamorphosed partly or totally into a substance somewhat like quartzite. In terms of one’s experience, the mountains are massive, awe-inspiring, absolutely vertical ramparts, generally red in color, and decorated with a wonderful patina of colored stains, resulting from the leeching of various minerals from the partly-porous rock. If you think Zion or Lake Powell, you will begin to get the picture. There is a wonderful PBS documentary, called “The Living Edens: The Lost World,” that does justice to this sensational scenery. Rent it on Netflix.

Angel Falls, the highest waterfall in the world at 3,212 feet, comes off Auyantepui, in a remote section of Canaima National Park that can be accessed only by small planes. To understand how high these falls really are, note that they are 20 times the height of Niagra Falls and 15 times the height of Iguazu Falls. To approach the falls themselves, after flying into Canaima, one must take a 5-hour motorized canoe trip up the river, take a dicey walk over wet roots, logs & rocks, and spend a night in a hammock. Canaima is a wonderland of numerous tepuis and is designated as a UNESCO World Heritage Site. We elected to climb Roraima Tepui, the highest of the tepuis, located in another part of Canaima National Park. This involves a 3 days of hiking, the first an up and down approach hike, the second 3000 vertical feet on trail, and the third another 3000 feet of adventuresome “scrambling,” using hands as well as feet.

The tepuis are biologically isolated from the surrounding savanna, and from the other tepuis. The result of this is that Darwin has taken over, so that, today, as many as 60% of the plant species and more than 10% of the animal species on top of these sky-islands are endemic and exist nowhere else on earth other than the individual tepui.

While most people are not familiar with these magnificent mountains, many will recall the Arthur Conan Doyle (of Sherlock Holmes fame) book entitled The Lost World, in which scientists climbed a tepuis, to explore the strange and alien world supposedly on top, and ran into dinosaurs and similar other-worldly creatures. This book became the basis for several feature films, including the BBC, Bob Hoskins film, also titled The Lost World. And, if you saw the animated feature film Up, you will be interested to learn that the entire second half of the film took place on top of a tepuis and that “Paradise Falls” in the movie is based on Angel Falls. The film crew spent substantial time on top of Roraima, recording the other-worldly scenery, though they got there by helicopter and avoided the wonderful 3-day hike we took to reach the top.

Orinoco Delta. The Orinoco River is the second largest in South America and has the third largest water flow in the world. It flows from the north coast of Venezuela into the Atlantic Ocean, near where the ocean meets the Caribbean. The Orinoco River Delta is immense, covering 30,000 square kilometers, the equivalent of a circle 12 miles in diameter. It is a showcase for mammals, water animals of all kinds, and amazing tropical birds. A unique feature of the Orinoco Delta is that it is “oceanic,” meaning that it is affected by tidal forces, to the extent that the river frequently runs “backwards.” Some sources assert that it is the only oceanic delta in the world.

Los Llanos. “Los Llanos” (“the plains”) is a vast tropical grasslands, laced by flowing water, far upstream in the Orinoco River Basin, as it runs between Colombia and northwestern Venezuela. The area boasts more than 100 species of mammals and over 700 species of birds, giving it about the same number of bird species as found in the entire United States.

Capybara. Currently, my favorite wild animal is the Capybara, a semi-aquatic South American rodent. It is the largest rodent on earth, but please don’t think “rat.” They stand 2 feet tall, they have no tail, and their blunt snout and cute facial features give them a perpetual air of self-assured, almost arrogant, calmness. Think “100 pound hamster.” If you want to see “cute,” take a look at some of the videos of domesticated Capybaras, starting at this link. We saw hundreds of them every day. They are gregarious animals, and we often saw “flocks” of them, like sheep, grazing in the tall grasslands. We also frequently saw them leisurely swimming in the river, eating Water Hyacinth. And, families of them would nap on the dirt roads, not moving when we drove by. 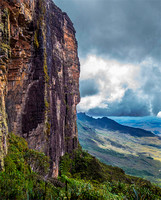