16 photos
The Farallon Islands are a group of small jagged, rocky islands, that lie 28 miles straight west from San Francisco. They are technically part of the City & County of San Francisco and lie in the middle of the federally-protected Gulf of the Farallones National Marine Sanctuary. They are sometimes referred to as “California’s Galapagos,” and they contain 13 species of breeding shorebirds and seabirds, including the largest colony of breeding seabirds in the continental United States. Many of the photos on this page are of Western Gulls, and the Farallons host the world’s largest colonies of both Western Gulls and Brandt’s Cormorants.


The waters surrounding the islands are filled with an incredible collection of marine life, one of the richest in the world. The reason for this is that the ocean off the coast of Northern California is bathed continuously by a cold stream of water, called the California Current, which flows from British Columbia, along the west coast of the United States, and ends off the coast of southern Baja California. The waters off Northern California are quite deep, about 6,000 feet; and, as the California Current passes by, it creates upwellings, particularly in the spring, which result in dramatic blooms of plankton (“krill”). These tiny creatures are eaten by the birds, fish, and marine mammals; and this is what makes the wildlife population so healthy.


The pinnepeds include Northern Elephant Seals, Harbor Seals, Steller’s Sea Lions, California Sea Lions, and Northern Fur Seals, while the transient species of whales includes Gray Whales, Humpback Whales, and Blue Whales (the largest animals on the planet). And, finally, the waters surrounding these islands support a large population of seasonal Great White Sharks. Of note, the Great Whites that visit these waters are some of the largest in the world, with the average length of the male sharks being almost 16 feet and the average weight being almost 2,500 pounds. Interestingly, the females of this species are actually larger than the males, growing up to 20 feet in length. 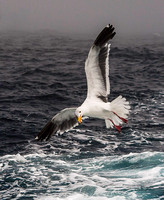