20 photos
Each year, the Wildebeest in northern Tanzania and southern Kenya migrate throughout the area, creating what it recognized as the largest animal migration on the planet. Wildebeest are also known as gnus. They are ungulates (hooved mammals), in the same family as cattle and goats, and they can grow to almost 5 feet, at the shoulder, and weigh up to 600 pounds. In East Africa, the Wildebeest is the most abundant big-game species, not only in population, but in biomass.

While it can be quite different from year to year, the total population in this migration involves not only around a million Wildebeest, it also includes an estimated 200,0000 Zebra and 400,000 Thomson’s Gazelles. These herds move generally in a clockwise direction, heading south on the Eastern side of the area beginning in November each year, heading toward the central and western Serengeti plains in May-June, and heading toward the northern Serengeti and Maasai Mara in Kenya starting in about July. These images were taken in the first week of August, perfect timing to look for the Wildebeest to be crossing the Mara River.

While it is indeed impressive to see tens or hundreds of thousands of migrating animals at a given time, much of the time is spent with the animals grazing or sleeping, rather than on the move. So, the reason people want to see the migration – and the absolute high point of viewing this wonder of the world – is the river crossings. And they are truly extraordinary to behold. There is danger to the Wildebeest, in crossing a river, including crocodiles in the water, the possibility of drowning in the mass of bodies, as it struggles to get across the river, and the danger of having a 500-pound hooved animal jump from a 20 foot cliff and land on your head! So here’s what happens. As the massive herd approaches the water, it slows down in anticipation, and the lead animals stand on the edge of the river, concerned about making the plunge. As more and more animals arrive at the riverbank, they begin to crowd against the animals near the bank, until it eventually becomes difficult for the early-arriving animals to maintain their balance on the shore. Finally, one or two animals will be forced to jump in and start swimming in a frenzy, in the swift-moving water, toward the other side. As soon as one or two animals make the plunge, the rest follow immediately, equally in a frantic effort to get across the river without being injured or killed. The photographer witnessed 4 crossings in 3 days in the area, and these events ranged from about 45 minutes to an hour and a half. After each crossing, we noticed a few dead animals floating in the river; and, since we did not see any crocodile attacks, these animals must, in the frantic mass effort to cross the river quickly, have either drowned or been killed by the hooves of an animal jumping on top of them. 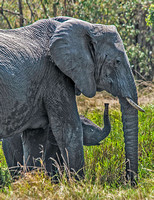