Male Mountain Gorillas grow to over five feet tall and weigh close to 500 pounds. When standing erect, on their two hind legs, however, full-grown males can be over six feet tall. They have arm spans of almost eight feet. The females are substantially smaller, growing to just over four feet tall and about 220 pounds. The males are initially all black, but, when the reach the age of about ten years old, the hair on their backs turns silver in color. From that point, they are referred to as “Silverbacks.”

Mountain Gorillas are diurnal. They spend most of their daily time foraging for food, and each night they build nests, generally on the ground, in which to sleep. They are essentially vegetarians, with the males eating up to 75 pounds of vegetation a day and the females eating more like 40 pounds. In Rwanda, there are eight groups of Mountain Gorillas that have become accustomed to humans, and a significant tourist industry has developed, taking guests to see these wonderful creatures. Each day, trackers follow the accustomed Gorilla groups, until the groups settle down for the night. The trackers leave them there, go home for the night, and return very early in the morning, to the place where the animals slept. If, as is usually the case, a group has already departed for the day, the team tracks it until it re-establishes contact.

The benefits of having groups become accustomed to people are, one, that they are not afraid and do not run or hide from approaching groups and, two, they do not tend to act aggressively toward visitors. Interestingly, many of the present-day trackers were previously poachers. It is expensive to go see these animals, with a daily fee for the Volcanoes National Park, where these animals can be seen, that rose in 2012 from $500 to $750 per person, per day. However, the money generated from these activities is used to pay notably good salaries to the workers, making it advantageous for them to forsake their lives as poachers and join forces to protect the animals.

As a result, the number of these animals has risen impressively in the last few decades. When American zoologist Dian Fossey was murdered in Rwanda in 1985, there were fewer than 300 of these wonderful creatures left in the world, while today the population has grown to as many as 1,000. The species remains "endangered," under the standards of America's Endangered Species Act and the International Union for Conservation of Nature (“IUCN”), which means they are at “very high risk of extinction in the near future.” But there remains good news, and cause for cautious optimism, at least for now, in that the last recorded event of poaching these animals was almost ten years ago!

In order to view these extraordinary animals, one must trek through true mountain jungle, anywhere from one hour to perhaps four hours, each way. When the group arrives at the Gorillas, it meets up with the trackers about 100 meters from the animal group. The visitors are instructed to remove items like daypacks, hats, glasses, and extra camera gear and leave them with one of the guides. This is to remove from the Gorillas the temptation to reach for these objects, something that would be disconcerting at best and dangerous at worst.

In Rwanda, the rules prohibit visitors from approaching closer than 23 feet (7 meters), from making sounds, from touching, or from making any other attempt to engage the animals. However, if a visitor is standing still, the Gorillas are free to approach as close as they like. The photographer was careful to follow the instructions of the guides, in this regard, but the animals often approached very close. A large Silverback approached close within literally inches and stood there for a minute or two. The 2-3 year old baby Gorilla that appears in many of these images was first spotted when the group had stopped more than 23 feet from him and a large Silverback. When the baby saw our group, he did a summersault toward us and then looked for acknowledgment. When he did another, he landed on his back, about 3 feet from the photographer. He seemed to love the attention and engaged in a serious of antics to impress us. Finally, he approached and attempted to touch a member of our group; but, when that happened, the guide instructed the group to move backward a step or two. Finally, an incident arose when the group was directed to stand off to the side of a Gorilla trail, as a group of animals approached on the trail. When one 5-7 year old, maybe 250 pound, male passed, he actually pushed the photographer’s thigh and forced him further off the trail and into the steep and thickly-vegetated jungle. This was not malicious, but it was definitely intentional! 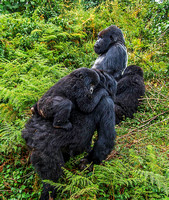 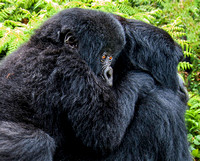 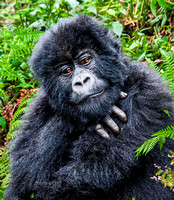 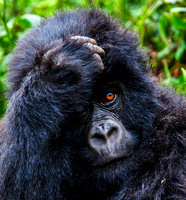 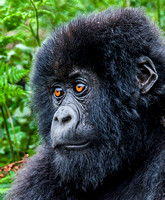 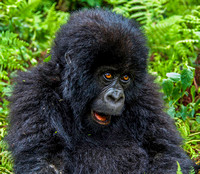 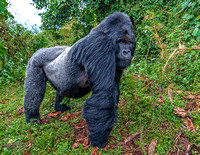 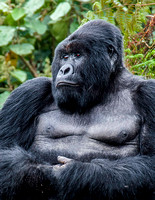 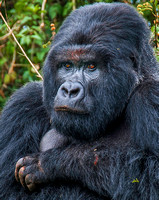