50 photos
The seven countries (six, if you count Kosovo as part of Serbia) of the former Yugoslavia have much to offer visitors. The greatest, most singular natural attraction is Plitvice Lakes, Croatia’s unbelievable National Park and UNESCO World Heritage Site. This place is one of the true wonders of the world. In the park, a series of 16 interconnected lakes are separated by a series of travertine dams. The lakes are beautiful, changing colors from azure to green to blue to gray, depending on the minerals and organisms in the water and the angle to the sunlight; and the travertine buildups between the lakes present a remarkable, absolutely stunning display of large, very unusual waterfalls. These waterfalls are made of travertine and are created through an interesting process, involving the deposit of calcium carbonate in an unusual manner. Calcium carbonate is a common and important compound that is found in rocks all over the world, in forms such as limestone, stalactites, tufa, calcite, chalk, marble, and travertine, and in eggshells, snail shells, most seashells, hard corals, and even pearls. Carbonic acid is formed when carbon dioxide is dissolved into water. This is commonly seen in carbonated water, which is created by bubbling carbon dioxide through water. The sharp taste enjoyed in carbonated water, and indeed all carbonated drinks, is the carbonic acid that is suspended in the water. While this acid is desirable in soft drinks, it presents a very serious threat to much of the marine life on which our survival depends. 30-40% of the carbon dioxide released by humans into the air is dissolved in the oceans and other waters of the planet, and this is leading to dangerously-high and ever-increasing amounts of carbon dioxide in our oceans. This ominous phenomenon is known as “ocean acidification,“ and it has the effect of reducing the ability of calcifying marine organisms, such as hard corals and some planktons, to form calcium carbonate, actually dissolves their calcium carbonate bodies, and threatens their very existence. This will increasingly upset the delicate balance of many important marine life forms and disrupt the vital marine food-chain. Calcium bicarbonate is formed when calcium carbonate dissolves into the carbonic acid in water It can ultimately disgorge the dissolved calcium carbonate and, depending on the manner in which this precipitation occurs, can lead to the creation of some amazing phenomena such as Carlsbad Caverns, the hot pots in Yellowstone National Park, waterfalls such as Havasu Falls in the Grand Canyon, the Dolomites in Italy, and the amazing karst formations found in Guilin in China, Ha Long Bay in Vietnam, Phang Nga Bay in Thailand. In calm water, calcium carbonate tends to remain in suspension. However, if the water is above 57 degrees Fahrenheit, and if there is movement in the water, the suspended calcium carbonate will tend to precipitate out. At Plitvice, the gentle flow of the calcium and carbon-laden water is interrupted each time the water flows from one lake to the next. As the water flows over the thresholds, it is agitated – through deceleration, aeration, and spraying – and this causes the water to drop its calcium carbonate as sediment. One would think that the sediment would just be washed down the river. However, at each of the passages between lakes, there is an accumulation of mosses, algae, and bacteria. The sedimentary calcium carbonate is caught up in the organic mass and held in place until it hardens. The process continues with further organic materials growing on top of the encrusted calcium carbonate. As this process progresses, it builds into a porous wall, with small caves and holes in it, which explains why the waterfalls at Plitvice have water coming out up and down the entire height of the falls, a feature which is quite rare and overwhelming beautiful.

The Modern history of the former Yugoslavia is labyrinthine. Unless a visitor is willing to spend significant time studying this history, it is difficult to grasp the motivations that underlie the horrific wars of the early 1990s, with their shifting allegiances and widespread genocide. The roots of these wars lie in the Second World War and earlier. Here is my best effort to provide a general idea of the circumstances that led these wonderful people into such horrific tragedies. (1) 1941 – The Nazis invaded Yugoslavia, and the country surrendered 11 days later. German forces occupied most of today’s Serbia, Italy occupied today’s Montenegro, and a Nazi puppet government called Ustaša was established to govern much of today’s Croatia and Bosnia-Herzegovina. Many Croatians supported the Ustaša government, in the hope that it would eventually lead to independence from Serbia. Ustaša established death camps and exterminated vast numbers of Serbs and other “undesirables.” (2) In Serbia, Četniks, a group that had been formed in 1904, operated as a pro-Serb, anti-Axis paramilitary group. In pursuit of an independent and pure Serb state, they murdered or expelled countless Croats and Muslims. (3) 1946 – After the war, a Yugoslav partisan army, led by Josep Broz (better known by his wartime code name, “Tito”), rose to oppose the Ustaša and Četniks. Tito was able to unite modern Yugoslavia, through brutal repression, torture, and execution of tens of thousands of Nazi sympathizers and others who opposed him. Then, with personal charisma and a nuanced ability to play on the world stage, he held the country together and, though largely communist, managed to avoid direct alliance either with the Soviet Union or the western powers. (4) 1991 – The Ten-Day War – Slovenia was predominantly Catholic and the most homogenous, prosperous, geographically isolated, and pro-Western of the Yugoslav provinces. When it became the first to secede, the Yugoslav People’s Army went in to “restore order” but, meeting stiff resistance, agreed after only 10 days to withdraw. (5) 1991-95 – The Croatian War of Independence – Croatia declared independence on the same day in 1991 as did Slovenia, and the half-million Serbs living in Croatia immediately declared independence from Croatia. This led to the bloodiest European conflict since the Second World War and one in which the Serbs were guilty of genocide against the Croats. (6) 1992-95 – The Bosnian War – Though allied in their fight against the Serbs, the Croats and Bosnian Muslims also fought each other, anticipating the eventual division of the geography into separate states. This is the conflict in which the Serbs operated “rape camps” and engaged in “ethnic cleansing” and genocide. Ultimately, the parties agreed to a UN-sponsored peace agreement. (7) 1998-99 – The Kosovo War – Ethnic Albanians made up about 90% of the population of Kosovo, and they wanted independence from Yugoslavia. Slobodan Milosovic, President of what was left of Yugoslavia, initiated a Serb offensive against the ethnic Albanians, including those in Albania and in Kosovo. This Serbian offensive, and its attendant genocide, led NATO to launch airstrikes against Yugoslavia and ultimately led to a UN-sponsored peace agreement. (8) 1999-2001 – There were two conflicts, involving ethnic-Albanian and the Albanian National Liberation Army, Serbia, and Macedonia, and both were relatively short-lived and were settled by peace agreements. (9) The area has been peaceful since. Though one might expect the former enemies to bear serious grudges against one another, with the possible exception of the Albanian minorities in Serbia and Macedonia, the parties now live in what appears to be genuine peace and good will. Interesting note on ethnic and religious background. I find it surprising, even astonishing, that all of the hatred and atrocities in this area have come to pass in the context of a population which, while divided into three religious groups (Roman Catholics, Eastern Orthodox (Christian) sects, and Muslims), has substantially no ethnic differences among the people who practice these different religions! 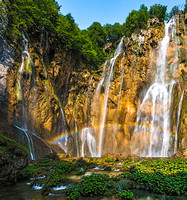