13 photos
Chimpanzees are wonderful creatures who, along with Bonobos (previously called Pygmy Chimpanzees), are genetically the closest living relatives to humans, sharing an incredible 98% of their DNA. This certainly makes them interesting to humans. You can look into their eyes and know that they are sentient creatures.


They live in populations that cover a large swath of Central Africa, from Senegal on the west coast to Western Tanzania. One of the well-known refuges for Chimpanzees in Mahale Mountains National Park, located in Western Tanzania, on the east shore of Lake Tanganyika, about 80 miles south of Kigoma. Jane Goodall started and did much of her pioneering work with Chimpanzees in Gombe Stream National Park, which is located on the same Eastern shore of Lake Tanganyika, about 10 miles north of Kigama and 90 miles north of Mahale. Mahale and Gombe are the only two areas in Tanzania where Chimpanzees are protected.


Chimpanzees are officially “endangered,” meaning that they are at very high risk of extinction in the near future, they have already disappeared from four African countries, and they are near extinction in many others. Yet, the Chimp population at Mahale is the largest known population in the world, and the animals flourish there.

Lake Tanganyika itself is interesting in its enormity. In volume and depth, it is the second largest lake in the world, behind only Lake Baikal in Siberia. It has 7 times the volume of water in Lake Victoria, the largest lake in Africa, measured by surface area, and this single lake has almost as much water as the five Great Lakes put together. 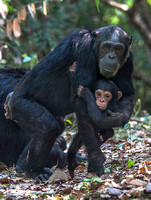 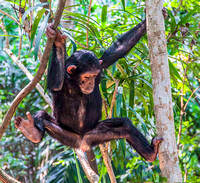